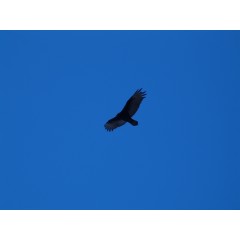 The next morning we got out early to ride the length of nearby Presque Isle State Park. Pennsylvania has only a 46-mile stretch of frontage on Lake Erie, and part of it is the 7½-mile-long Presque Isle Peninsula, which contains a dozen soft sand beaches, multiple bays that host some of the best smallmouth bass fishing in the world, and Perry’s Monument, a 101-foot-tall cement and stone obelisk commemorating Admiral Perry’s victory in the Battle of Lake Erie in 1812. Perry built many of his ships using timber form the Erie area, then sailed them west on Lake Erie to Bass Island, near Toledo, Ohio, where he engaged and defeated the British warships. In 1812 the peninsula was about a mile farther west than it is now: a process called longshore drift — the continual action of prevalent westerly winds sweeping across the peninsula — picks up sand and moves it east, thereby moving the peninsula’s tip east at a rate of a half-mile every hundred years.

Now breakwaters are in place to slow the erosion, but despite them sand must be periodically trucked in to replenish the beaches. The Perry monument overlooks a placid pocket of Lake Erie called Misery Bay, so named because this is where many of Perry’s troops were billeted and buried when they contracted smallpox and died. The troops are buried in common, unmarked graves and occasionally remains are still unearthed: dead soldiers who no longer feel the gentle cool kiss of this thin summer breeze, who can’t kibitz with old black guys catching trophy smallmouth bass off the E. Fisher Street breakwater, and who can’t enjoy one of the twenty-four houseboats legally allowed on Horseshoe Pond near the Coast Guard Station.

From Presque Isle we rode to Dobbins landing, located on the downtown Erie waterfront, and took an elevator up the Bicentennial Tower for a 360° view of Erie the town and the lake. The view was of a medium-sized city flanked east and west by miles of beige beach licked by pastel blue water. Due north, touching a pellucid sky, was the deepest point in Lake Erie (210 feet) where more ships have been wrecked than any other place on Earth, including the Bermuda Triangle.

From Erie, Pennsylvania we drove the Lake Erie littoral west with the day’s destination being Port Clinton, Ohio, billed as the walleye capital of the world. Lake Erie is the shallowest Great Lake and its western end, where walleye thrive, is its most shallow and vulnerable: since 1995 the amount of dissolved reactive agricultural phosphorus pollution entering Lake Erie from the Maumee River has increased 218 percent, causing massive algae blooms that threaten walleye, other fish and mammals, and people.

Again the weather, spring fading to summer, was clear and cool and the absence of wind made a mirrored lake reflecting a febrile jumble of sun rays. We rode for an hour until stopped by a raised drawbridge where the Ashtabula River empties into Lake Erie and forms Ashtabula Port, an important coal and chemical shipping location, another terminus of the Underground Railway, and the town that inspired Carl Sandburg to write, “Crossing Ohio When Poppies Bloom in Ashtabula.”

From Ashtabula we continued on Highway 2 past miles of vineyards until we drove through Cleveland on the Cleveland Memorial Shoreway flanked on one side by the city’s glass encrusted buildings reflecting sun and shadows, and on the other side by shoreline greenbelts, the Rock and Roll Hall of Fame, the massive concrete condor’s nest called First Energy Stadium, and dozens of sailboats skittering about the lake like white water beetles.

Past Cleveland, and slightly east of Sandusky, we jumped on a freeway that took us south of Sandusky, then north across Sandusky Bay causeway into Port Clinton. I had booked rooms at a Comfort Inn but none was to be found where Google Maps said it should be; instead there was a Quality Inn. We wandered up and down East Harbor Road until I remembered that Quality Inns, like Comfort Inns, belonged to the Choice hotel chain. We returned to the Google Map location and sure enough the place was the same though the name had changed. We registered and in addition to our keys we were each handed a sheet of paper that described the annual mayfly hatch, and assured us that the gossamer-winged little buggers were, though a nuisance, of no danger.

Our hotel was on Lake Erie and had a large patio overlooking a riprapped shoreline clinging to a thin ribbon of sand beach. I was dusk and I sat in a deckchair smoking my evening cigar watching an orange setting sun silhouette distant nuclear power plant hourglass shaped cooling towers, located on a barely visible peninsula. As if a switch were thrown, millions of mayflies rose from the lake’s surface to commence a jittery bobbing mating ballet in upward rising thermal columns. Soon everything was cover with post-coital mayflies: me, my chair, the patio, the entire hotel. Mayflies clung to every leaf on every tree. They covered the parking lot and all its vehicles. Gulls and other birds with open mouths streaked through the still rising hoards until so sated they could barely fly. It was getting too dark to see, but I knew the walleye must have been going nuts with all that food. Each step I took toward the hotel entrance emitted a crunch crush of mayflies.

The mayfly lifecycle is one day, so in the morning I went to clean off Big Ruby and was surprised to see how few mayflies clung to her cover. Instead the insects lay in large heaps beneath every now darkened parking lot night light and street light. There were tens of millions of mayflies: most were dead but a few weakly opened and closed translucent wings in their final paroxysms of life as if saying goodbye to me. I wondered if Carl Sandburg considered writing a poem entitled, “Crossing Ohio While Crushing Mayflies in Port Clinton.” Something like:

Crush me mayflies in Ohio,

Crush me mayflies on the lake’s shore

make it a buggy summer, mother; the wings

sing in the silk, the wings sing a gossamer

to be here now.

That night Mom stood at the foot of our bed; she dug into her apron pocket and pulled out a handful of dead mayflies. “They are dead, I am not,” she said. “They don’t need proper gravestones.”

“Yeah, but they died mating, so maybe that’s why they’re happier than you.”

From Port Clinton we went southwest to avoid Toledo, then northwest toward Howe, Indiana, our next destination. Before leaving Ohio we stopped for lunch at the Welcome Home Diner in Bryan, Ohio. Bryan was part of the territory disputed in the Toledo War between Michigan and Ohio: In the end Ohio retained the disputed land, and Michigan was compensated by being awarded the western part of the Upper Peninsula. Bryan is the home of Dum Dum suckers, and Etch A Sketch.

We got an early start in the morning and were home by mid-afternoon. After each of our Great Lake circumnavigations we experience a short period of road weariness where we spend a couple of days doing routine, mindless things while we process the trip and soak up energy. Not this one. I knew Mom would constantly control my thoughts until I had her death date chiseled on her tombstone. My fear was that I would not be able to accomplish the task long distance and that she would plague me until I got physically back to Niagara Falls, which at the earliest wouldn’t be until next year when we rode around Lake Ontario. For an entire year I would feel like I failed Mom.

It took me two more days of initial approach-avoidance to make the initial phone call after looking up the number for Holy Trinity Cemetery on the internet. A lady answered the phone and I explained my problem. She said there was nothing she could do to help. I asked her who could help me and she said she didn’t know. Flabbergasted, I said, “What do you mean you can’t help? Isn’t that part of your business?” She said nope, it isn’t. Fuck me!

The more I thought about the call the more I was pissed. We were screwed by the funeral home, and now the church that owned and operated the cemetery refused to help. I thought of a number of options including calling the diocesan Bishop, but decided not to because it was likely I would never get to speak to the Bishop and was more likely to get mired in Church bureaucracy and only get more angry. So I Googled “grave monuments in Niagara Falls” and discovered the only tombstone company in the area is Niagara Monument. I called the company and left messages for two days.

Mom came to me each night, and each night more of her facial wrinkles disappeared, she put on more weight, and her skin lost its paper thin quality as she grew increasingly strong and formidable. And on each appearance she said only one thing: “Try harder.”

I finally used Google Maps to locate Mom’s cemetery and noticed it was adjacent to two other cemeteries, with the closest being The Gate of Heaven. What the hell, The Gate of Heaven: that sounds like a winner. I phoned The Gate of Heaven (how many people can make that claim?) and explained that Mom was buried in Holy Trinity Cemetery, that I was trying to get her date of death chiseled on her tombstone, and that the person at Holy Trinity refused to help me. The Gate of Heaven Lady verified that Niagara Monument was the only game in town, and that I had to call there myself. I told her I tried to contact Niagara Monument but with no luck. Finally I said, “Look, I really need to get his done for my Mom. Please help me.” There was a long pause before she said, “Let me see what I can do.”

In less than five minutes I got a call from Niagara Monument. “Sure we can get that done for you,” the woman said. “It’ll cost $350. In advance.”

“Well, we use a sandblaster, but that’s the going rate.”

I knew there was no other option so I said, “Will you send me a picture of the final product.”

After all the arrangements were made, and the money paid, Mom came to me one final night. In full smile and with a dishrag in hand (I smelled the faint odor of bleach, which Nell maintains was Mom’s favorite perfume) she said, “Three hundred dollars is ridiculous. I could have chiseled them down.”

Next year we circumnavigate Lake Ontario and I’m sure we will stay in Lewiston, New York, near my parents’ graves. Maybe I’ll visit them.

Enter the code in the box below: